With the blog finally in this acceptable state, I have finally started to think about what I would like to write about, and there is just too much to say!!

I would like to first talk about this new awesome publishing pipeline I have setup, which is 10000 times more awesome than wordpress’s useless tools. It’s simple, it’s elegant, and you bet it’s hacker-material! :D

Another post worth writing is how to deal with code snippets and cheatsheets. This is probably one of the most understated topics of all time. As a n00b scripter, I really wanted to write scripts very quickly and reuse them, and expand from there and all, but coming from an OOP experience, it was impossible to learn all the APIs, as one would normally do in OOP. I started what I call a cheatsheet… A few months later, I ended up with a cheatsheet in my documents folder, one in dropbox, and even one on my shirt: 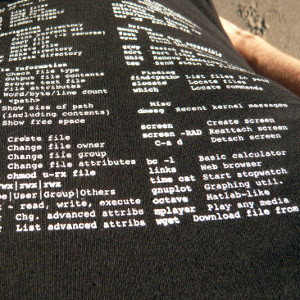 Not only were they ridiculously distributed, but also they were written in plain text… YUCK!! The new way I roll with combines two awesome projects into an epic cheatsheet storage!

And then, there is this list from my old blog, and my new hidden list in trello about various programming topics…

Conclusion … WHERE TO START?!

« After All That Trouble...
Forcing AAC Down iTunes' Throat »