I am really having trouble with this introduction… I erased it and started all over like 5 times now. Well, no more. What ever comes out, it shalt remain…

I wanted to express this new source of inspiration, motivation and even an escape from the endless piles of work that is waiting to get done. That source is … Books! Not any type of books, though. Books that provide extremely useful information and advice, and at the same time are deep and honest, as well as funny, mind you. Can’t stay focused without a little laugh. The first book I started with is Jeff Atwood’s awesome book, Effective Programming: More Than Writing Code. I have honestly yet to finish the book, I recently started.

The great thing about this book is how it insanely it influences my thoughts, mood, and motivation. I have stopped to read this book three times now, and I couldn’t continue reading more than 8 pages at a time (plus the links to videos and posts). I would start reading the book because I am feeling tired from working, or I just woke up in the morning, and I’m just not feeling it. After reading through the book, just a few pages, I just can’t help but jump and start getting productive. The only reason I am writing this blog right here, right now, is because of that freakin’ Voodoo book… I say that because, while reading the book just now (I read 3 pages), I reached this part:

I wasn’t trying hard enough. I had forgotten. I can’t fully process all the things that are happening to me until I write about them. I have to be able to tell the story to understand it myself. My happiness only becomes real when I share it with all of you. Jeff Atwood

After working the whole day on this problem (which I have been thinking about for a while), I came up with some interesting results that weren’t found in the StackOverflow question that addresses that exact same problem. Unfortunately, tired from grinding the whole day, I decided to leave writing about it to another day… A day that may never come. Fortunately, I picked up Jeff’s book (or actually the iPad) and started reading. 15 minutes later, here I am writing the post I wanted to write! Tell me this isn’t Voodoo.

I was entrusted with the deceivingly mundane task of localization. The task quickly because more interesting when I realized we need to support two languages: English (Left-To-Right) and Arabic (Right-To-Left). Text alignment and other code-side changes weren’t anything if statements couldn’t solve, however, the dreaded XIB files were the main issue. In my previous apps that preceded Xcode 5, I had to create and manage multiple XIB files, which was just plain annoying… Not with Xcode 5!

Thanks to Apple’s AutoLayout system, flipping the UI around was surprisingly easy! Specifically, assigning leading and trailing spaces for subviews will make the layout intelligently switch between LTR and RTL. Unfortunately, Apple didn’t take it a step further to support flipped controls, specifically UISegmentedControl in my case.

As you can see, this is the problem:

Doing this manually everywhere is error prone, and gets tedious really quickly… So, that needed to be solved.

If you are thinking about sub-classing; just forget it. Using a subclass solution requires knowledge or control over the instance storage, especially when the guys who wrote those classes work at Apple. Let’s look at this simple reversed back-trace to see how sub-classing can easily break:

As you can see, the superclass may query the selected segment’s index either through direct instance variable access or by using the selectedSegmentIndex accessor. Since these two approaches yield different results, we might leave the object at an inconsistent state. “How about we disable localization logic when the calls are coming from the object itself?”. Not possible, at least not in ObjC.

The first thing that crossed my mind was to wrap the object with a proxy that would flip all the segment indexes coming in and out of the control: 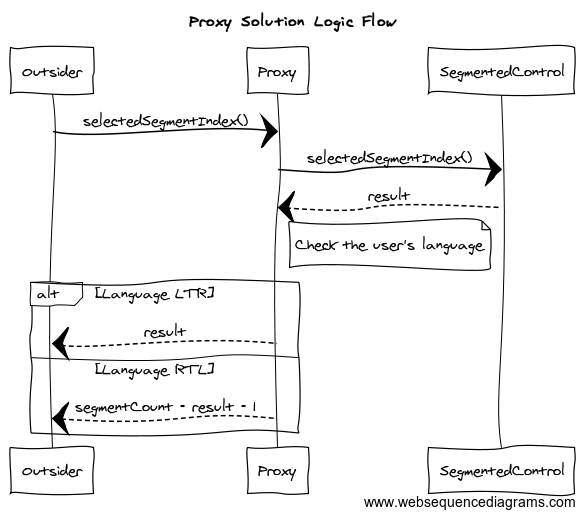 That seemed like to much work, so I went ahead and implemented a simple category that the developer has to call in order to get the proper result (available on github). The way it works is simple: Replace all your calls that are related to the segment index with the methods found in the category, and it will check if the user’s language is RTL, and flip accordingly:

Is that it? No way. I summoned the motivation necessary to try out the proxy design, and I came here today mainly to discuss my findings.

Let’s first debrief the reader (hey, that would be you!) about the NSProxy class.

The NSProxy class is one the very special classes, since it does not inherit from NSObject. It is also an “abstract” class. I add the quotes since the compiler doesn’t stop you from instantiating an object, as you might see in other languages. It is, however, useless without a subclass.

Remember, a proxy is like a middle-man between an object and the outside (or inside) world (see sequence diagram figure above). Hence, sub-classing NSProxy allows you to handle the intercepted messages. It can also allow you to wreck havoc by altering method signatures, provide fake interfaces, and all sorts of voodoo, but let’s leave that for another time… A time when I have my handy staff with me.

Whenever a method is called on the proxy object (e.g. selectedSegmentIndex shown in the example above), you probably don’t want to implement that method in the NSProxy subclass! Before raising an exception, the Objective-C runtime will attempt to forward you the invocation that occurred to the target, and give it another chance to respond. (An invocation is simply a structure that defines a target and a selector)(The example found in Apple’s docs is awesome. Link above).

OK, that about sums it up as far as the NSProxy introduction goes.

OK, so now we are going to see how the proxy implementation went as far as wrapping it around a UISegmentedControl. Remember, we want to take an incoming index, and flip it. We also want to do the same for the outgoing indexes.

I’ll also say this: The journey down this path was full of failed attempts, so brace yourselves for what’s to come.

The first fail was 100% my fault. I jumped headfirst into the implementation and got a punch right between the eyes. You see the forwardInvocation: example above? I assumed that ALL return values and arguments are objects. I assumed that much because that’s how KVC works. Even if you have an int property, when accessed via KVC, you would use NSNumber object wrappers.

After fixing the issue above, I got a really strange error from initWithCoder:, which is called, since the object is instantiated from a nib.

What’s that suppose to mean? After thinking about it for a bit, I realized that initWithCoder: returns self, which is the internal protected object! (The segmentedControl in our case). BAD! Let’s fix that. So, here is what I did:

This is when I reached the real roadblock. This is where developers from StackOverflow stopped, as well. We got a strange error:

The most important question that we should be asking ourselves here is, how in the name of- did someone access the RTLSegmentedControl without our knowledge! I made a dump of all the messages passed to the proxy (which itself passes them to the internal object), and superLayer was not one of them! This is when you use your knowledge from lower level languages!! By observing the UIView headers, I noticed that:

Interesting! We obviously have a situation of direct pointer access here, for optimization maybe? What apple is doing in their framework is something like:

To quickly test this out, I added a property above the target property in the proxy subclass, and it got me a bit further down the chain! Didn’t quite work, mind you, just proved that this is issue.

So, what should we do to solve that? Summon the Black Magics.

Don’t Try This At Home

To solve this problem I thought of two solutions, an awful one, and a crappy one.

The first solution I implemented was to transform the proxy object. What does that mean? Exactly what it sounds like! Temporarily change the proxy object to the internal object! Uh, is that even possible? You bet it is, and here is how it’s done:

We simply reassign self to something else! The only reason I went through the trouble of implementing a Voodoo category, and passed pointers around is because direct self assignment is disabled in ARC. So, yes, the category has ARC disabled.

Did that work? No, it was the worst idea of all time. It wasn’t easy to revert back after transforming! What would Optimus Prime say?

Instead of the above, I thought about stealing instead… Let’s not transform the proxy object, but rather, have it steal the pointers from the protected segmentedControl object! What I mean is this:

And THAT worked! When that piece of code in apple’s framework tried to access the layer through direct pointer access, it finds it in the proxy object!! Yaaay!

So, it worked! I ran the project, and all the controls are being flipped automagically, and it seemed like it’s raining unicorns and kittens. Actually, note really :(

Here is when I noticed that stealing is bad. I only handled the CALayer’s case, and it seems like there is another access optimization going with AutoLayout, since that gave out errors as well when enabled. I also got a few random crashes from time to time. Random crashes are the Aizen of programming, or the Yagami Light, or even the Hisoka!! (OK, that’s going too far there).

In any case, that’s where I decided to leave it at, and that’s that as far as this thing goes!!

P.S: The complete code can be found in the RTLSegmentedControl repository, under the proxy-pattern branch.